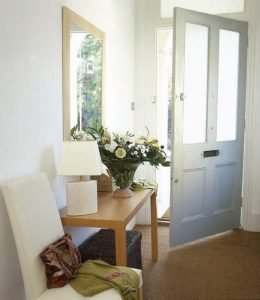 Drive down any street and you’ll see a trend I am not a fan of—charming smaller homes being torn down willy-nilly, replaced with places that positively sprawl. While the McMansion phase is waning, especially in Westchester where building departments reign in developers, the average American new build home is still nearly three times the size of a home built in the ‘50s. And in my opinion—as someone who has just traded a rather large manse for a much, much smaller one—bigger is not always better. When I meet new clients considering buying an oversized behemoth, I caution them. Will a grand home, where the kids go off and isolate themselves in their own spaces, make you happier? Do you realize you not only have to pay for it now, but always—in rooms you don’t “always” (or almost ever) use? And what of the stuff? I’ve found that just as work expands to fill the allotted time, stuff expands to fill space. A lotta space means a lotta stuff. True, as a designer, this is not a terrible thing—but stuff does not equal happiness. (And there’s a reason the most popular course at Yale, with more than 1200 students, is on happiness.) So, happily, there’s a sea change a comin’. A real paradigm shift that favors small, thoughtful design. Our new, diminutive home—by today’s standards, anyway— measures 1,700 square feet. The trick to not sacrificing quality of life or function is to use all of the square footage, something I’m learning along with my clients. 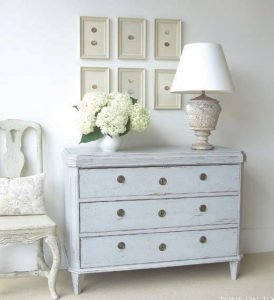 LIVING IN THE LIVING ROOM

Melinda and Stephen, who are ensconced in a Georgian near the water, were not early adopters of media in the living room. Finally, they, like me and probably like you, acknowledged the reality of life and hung the TV over the mantle. And why not? Doesn’t some Frank Stella art sort of look like that—a blank black screen, I mean canvas? Not every family has or wants one of those dedicated media rooms. I am team bring-the-living-back-to-the-living-room, and have even tucked our old refectory dining table under a window in the space to serve as a reading table and de-facto desk. An armoire nearby does double/triple duty by housing all manner of napkins, placemats, pens, phone chargers, et al.

CREATE A SENSE OF SPACE

I don’t really have an entry hall. Rather I have a small vestibule whereupon you enter a long living room. I’ve designated the far end of the living room as living space and the closer end, adjacent to the front door, as entry. With layered lighting and a subtle mood shift, I’ve created a sense of arrival: A pale blue painted Swedish chest, clear glass lamp and upright linen chair say welcome.

I love my collections—deeply. You might say they’re a bit of a professional liability— the white washed finials and stone bannister balls make perfect shelf toppers. And my birdhouse (and nest) collection takes tiny home to a whole new level. A challenge of small space living is what to do with the inevitable debris that an inveterate collector acquires. The trick: Edit, organize, curate. Basement shelving lets me rotate seasonally. It does take discipline. 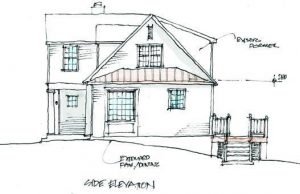 While I love living in our 1,700 square foot space, I have to be honest: We are currently working on an addition with architect Jim Fleming (aarchit@aol.com). Not a BIG one, but a 5 x 20 bump-out, just enough to enlarge both the dining room and the kitchen (currently a dark hallway with appliances). I can’t wait to have a kitchen island and French doors to a deck in back. Okay, okay, full disclosure: There will be a second addition. A small one, a mere 7 x 15 feet, giving us a much-needed master bath and squeezing in a small third bedroom.

So, while living small is a beautiful thing, I’ve come to believe the rough formula for a comfortable life is 1,000 square feet per adult (less for kids). And when we’re done, we’re going to be there. At least for now.